Spousal Sponsorship Applications can be a complex process. In some cases the processing time can take more than a year. Our India office uniquely helps you make the Outland Spousal Sponsorship process easier and streamlined, such that you can sponsor your loved ones to Canada at the earliest.

Family reunification is a vital component of Canada's immigration agenda. The Spousal visa allows applicants married to a Canadian citizen or permanent resident the unique opportunity to be sponsored along with their dependent children. The applicant and their spouse must be married and show the genuine and continuing nature of the relationship and intend to live together in Canada, upon approval.

What Is The Sponsorship Process?

A Spousal Sponsorship application is a two-step process. The first step of the process entails processing by the Case Processing Centre in Mississauga, where officers assess the sponsor’s eligibility. The application is then transferred to a Canadian visa office that is responsible for applications in the spouse, common law or conjugal partners’ country of citizenship or country of permanent residence, where officers assess the genuineness of the relationship and the admissibility of the applicant

A foreign national seeking spousal sponsorship to Canada faces a highly complex legal process, regardless of whether the application is submitted domestically or at a Canadian embassy or consulate abroad. The spouse, common-law partner or conjugal partner seeking to immigrate to Canada must be sponsored by a Canadian citizen or permanent resident, who must also submit a sponsorship application in support of the foreign spouse.

The validity of the marriage is a primary concern for Canada because it doesn't want its rules, which have been created to help reconnect families, exploited as a means of skirting immigration.  Marriage for the sake of immigration is the key objection here. However, real spousal sponsorship is treated as a priority

If both the sponsor and partner are legally residing in Canada, the couple may be eligible for either outland or inland spousal sponsorship. Despite being physically present in Canada when the application is submitted, if the spouse or common-law partner does not plan to remain in Canada the entire time the application is being processed, outland sponsorship may be the best route.

Types of Spousal and Partner Sponsorships

There are several ways that a spousal relationship is defined in terms of immigration.

You may be eligible to sponsor a spouse, a common-law partner, a conjugal partner or dependent children living outside of Canada if:

Entering Canada to marry your fiancée

The designation of fiancée has been removed from the rules pertaining to Canadian immigration. For that reason you can no longer sponsor your fiancee. Entering Canada under the pretext of being a visitor and then marrying a fiancée and applying for a permanent resident card can be risky and can result in an allegation of fraud.  The amount of time that passes between entry into the country and a marriage affects the onus placed on the couple to disprove fraud.  Such an application, while not impossible, merits careful consideration for success.

Often the Canadian sponsor would like the foreign would-be immigrant spouse to come to Canada as a visitor first. That way the couple can come to know each other first before they commit to a long term permanent marriage. Sometimes naively, such Canadians who perhaps met the foreign party on line, try to invite the immigrant to come to Canada as their guest. Invariably such invitations end up in failure as Canadian overseas officials detect that the immigrant is likely to stay in Canada no matter what happens and will not leave at the end of the period of authorized stay. Canadian partners are left with the one option of traveling overseas to marry and then returning home to sponsor the spouse. As harsh as this may seem, it is often the only choice the Canadians have.

If your spouse received a ban of 5 years to Canada for Misrepresentation under Section 40, it is still possible to sponsor them for Permanent Residence under the Family Class despite them being inadmissible for Misrepresentation. Consult directly with our Immigration Lawyer to receive a confidential consultation.

Or Email us at info@navratanfateh.com 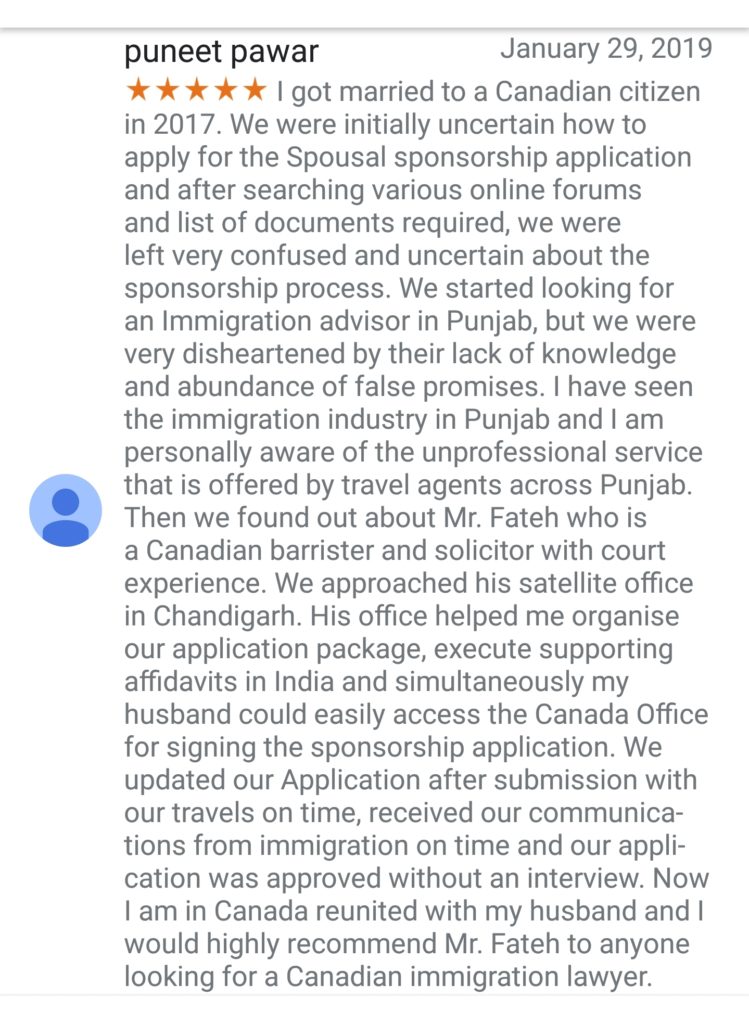